I would take moment of deep breathing before I begin with the story of our team just like we did before every round during the tournament. Before being titled the “Overall Winners” and “Best Mediator Team” (for those who need to know, the two main titles) of 7th NLIU INADR International Law School Mediation Tournament, we were just another law students curious enough to learn, more than win. Being first time participants in a competition (I had mooted before in Antitrust Law but Rohan and Sanjhi were participating in a competition for the first time), we expected to learn from other students senior in experience to us but the titles we won debunked our own wrong beliefs. 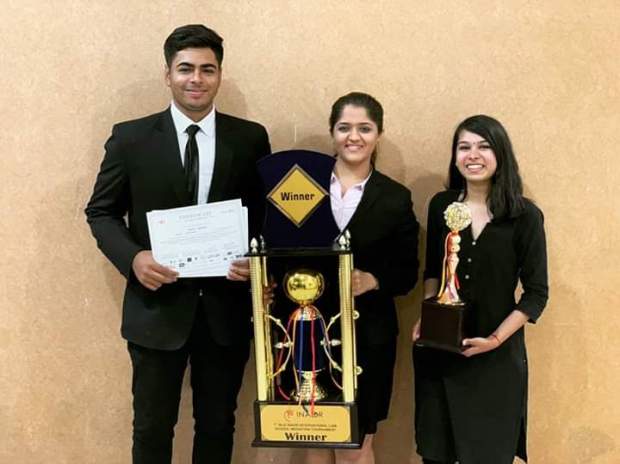 The journey began with giving intra-murals in Nirma University and secure a good rank to forming a team and believing each other, which very well laid our foundation for team work. We talked and met beyond professional reasons and bonded well which really made our relationship improve. Now this is exactly how Mediation and Negotiation works, securing relationship and Getting a Yes! Now that we started working together on the problem, we initially couldn’t figure out how to prepare. We read a book “Getting to Yes” by Roger Fisher and William Ury and understood what exactly Negotiation and Mediation means, to be very correct “Principled Negotiation” both in practical day-to-day life and tournament understanding of course resembles it with some variations. Apart from reading the book, we watched many tutorial videos and mock sessions and videos of other competitions to understand better.

However, there is a reason why NLIU INADR is the best tournament in Asia and how it is different from other Negotiation-Mediation Tournament worldwide. It requires all 3 team members do all 3 roles of Client, Counsel (Negotiators) and Mediator in first three Preliminary Rounds. Now that is tricky but a lot of learning. We three made sure to make each other understand each role that we “thought” we were best at and it turned out that NLIU INADR taught us all three roles really well, especially because after very first preliminary round, there is scope for improvement because you listen to your own role’s feedback and then of others too in the room. Now it depends on how you internalize the feedback and suggestions of the judges after every round. The team, even if new to such competition, but internalizes the feedbacks better takes the title. During the tournament, the judges not only pointed out what we did incorrect but also mentioned what we should continue doing, those being our strengths (like Mr. Valenti, Mr. Rogula, Mr. Ellis and many other judges did). It is in best interest of participants to listen carefully and internalize the feedbacks, not only for this competition and other ADR competitions, but also when they actually go out as professional mediators and negotiate in daily life or for professionally cracking a deal.

This tournament taught us the right gesture and correct words in the right moment, to think twice before speaking, to speak only when necessary, to listen actively, be polite even when one wants to let off the steam, to do as negotiators what benefits you but doesn’t harm the other side, to be unbiased and so on. All this learning did not exclude the fun we all had dancing at the cultural night and interactions during training sessions and lunch breaks. NLIU INADR Tournament 2018 is what we will cherish to have been a part of and having performed great for which we extend our gratitude to amazing judges, NLIU tutorials, training sessions, Nirma University and mutually to each other, as a team! We will cherish not only the winning titles but the whole journey and 3 days of learning. Success is not a one-time thing, it is not a fluke. It is not just about the trophies, Learning and Improving and Growing as a person is a victory in itself.